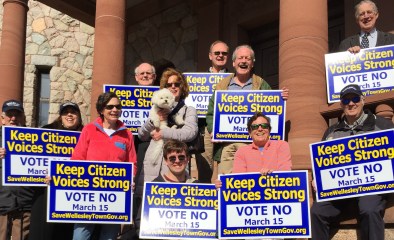 Wellesley has always had passionate volunteers who care about their town. The upcoming March 15th town referendum on town government is no exception. Legions of volunteers will be posting signs in yards and campaigning for their side of the ballot question: Should Wellesley switch from its current town administrator form of government to a much more centralized – and less transparent– town manager form of government? We spoke to the Vote No campaigners of SaveWellesleyTownGov.org, a broad array of high-schoolers to 90-year-olds, environmental activists to fiscal conservatives, physicians to lawyers to management consultants.

Both sides of the ballot question agree on one thing: that improving town management is a good thing. The SaveWellesleyTownGov.org group, however, says that this town manager proposal is an extreme form of government that will rupture what is good about our current government, and is not the norm even for town manager governments in Massachusetts. They say it concentrates too much power in the hands of one individual in three ways:

First, the town manager will have line-item budget authority over departments. This last minute addition to the proposed law has turned many former proponents against the proposal. It will not save money since the boards already have to adhere to strict budgets. But it will give a single unelected manager the power to decide what programs will be funded. Proponents say it’s silly to worry, that the town manager will not make unilateral policy decisions, even though he or she will be given that power. Opponents say a manager has neither the expertise nor the accountability to make those kinds of policy decisions (think Flint Michigan) and we can easily establish a government that limits risks of such abuses.

Second, the town manager will not be subject to the state’s new Open Meeting Law, which was expanded in July 2015 to cover all public bodies but not town managers. “Unlike our current system, a town manager can make policy decisions behind closed doors without public scrutiny or input,” Town Meeting member Jeanne Mayell said. “It is unwise to give this power to one individual when there are safer ways to improve management without taking such risks,” said Mayell.

Third, the new law will remove town employees from direct board supervision and place them under the town manager. “Most comparable towns do not run their operations this way, so why go there?” said Mayell. She pointed out that the library trustees and the boards of health control their own staff in the majority of towns.  “So Wellesley’s new government will be on the extreme end of town management structures,” she said. “The idea of a Town Manager seems appealing,” she said, “but the devil is in the details.  It’s not improvement if it dismantles citizen voices in government.”

“Wellesley has had a citizen-run government since its founding in 1881,” said David Wright, former chair of the Historical Commission.  “That’s what built the modern, well-functioning town we enjoy today.  That’s New England-style democracy at its best.” The town manager proposal, however, will remove citizen-run government in Wellesley.  Under the terms of this proposal, a town manager who doesn’t agree with projects of elected boards can remove them from the budget or direct staff not to include them without citizen input or scrutiny.

A final problem that many have with the proposal is that once passed it will be hard to undo.  “It is sweeping change that was rushed through Town Meeting with no alternative proposals. It overrides the statutory authority of several of Wellesley’s elected boards and would require a town-wide vote to change back if we find it’s not right for us,” says life-long Wellesley resident, Tim Fulham. “Let’s take our time and get this right.”

Proponents of the Special Act argue that the town had sufficient time to study the issue because a study committee formulated the proposal during an 18 month process. But opponents point out that their study was biased and seriously flawed.  “There was little time to examine the accuracy of their data,” said Mayell, “which we now know was inaccurate in a key way.”  The study committee argued that Wellesley was an outlier that was behind the rest of other towns in our region. It turned out that while every town is a little bit different, a little more than half the towns the Greater Boston metropolitan area have similar structures to our own.  “When compared to the whole state, our current structure is the norm, not the exception,” she said.

“Residents recognize that Wellesley is functioning well today – the Town has a AAA bond rating, progressive natural resource management, first-class library services, excellent public works services and operations, and a commitment to strong land management,” says Library Trustee and town meeting member Ann-Mara Lanza, who holds an MBA from Wharton.  “We need to hold onto what is working while carefully improving management.”

Whatever your position, you can have your say at the polls on March 15th. In the meantime, go to www.SaveWellesleyTownGov.org to learn more.